I realized today that I never posted the finished storefront for Larry’s Occult Emporium & Gifts. Let’s take it from the top, from the reference photo to the finished drawing.

So, without further ado… 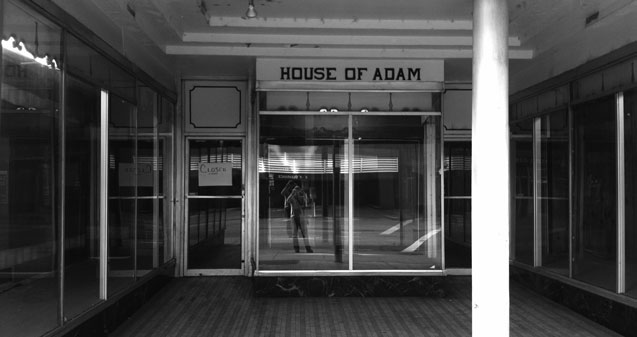 …and that’s how the sausage is made!

Our pal Larry is a big fan of Baruka, a being created in the image of his favorite deity, The Cosmic Werewolf in the Sky. You remember Larry, right? Here he is showing off his highly-collectible Cosmic Werewolf flag, only available for purchase at Larry’s Occult Emporium & Gifts:

While there are many images depicting the Cosmic Werewolf in the Sky, this one is my favorite. That’s probably because it’s the only one I’ve drawn so far, but still…there was a lot of thought and effort that went into this little guy. So, here’s a bit about the process behind the creation…

Here’s the sketch I started with.

It’s pretty rough, but I captured what I needed to. It’s circular (for reasons I’ll explain later) and it’s vaguely  Norse-like (Norsish? Norsey?) in style.

…then added a few guides to help define that core shapes a little better.

Next came the inking…

…and then I deleted all of that baloney underneath. Looks better, eh?

And finally, some color.

Here, I made a fancy GIF of the all the steps:

And that’s about it. I wanted to make the image circular so I could have another button to add to the collection. We’re up to four now.

So yeah, it was a lot of work for something that gets about one-and-a-half panels in the comic, but I needed to make it something I could be proud of. Mission accomplished.

Until next time…keep your eyes on the heavens for the grand appearance of the Cosmic Werewolf in the Sky! And thanks for reading!

I know what you’re thinking: I need more Larry! I mean that guy is crazy, right?

Actually, Larry would disagree with you. Like all the your favorite conspiracy theorists, he claims to know the secrets behind the real world, the true world that everyone else dismisses. The thing is, though… he’s kinda right. What comes off as gibberish is actually his attempt to drop some knowledge on the close-minded masses.

But hey, our story is told through Justice’s eyes, so…Larry is crazy. Ol’ Vic Waters (aka Justice) calls them like he sees them. But he’s also not afraid to use the bits of information that suit his needs…

I think this is going to be the front of a bookmark we’ll have printed for the next show. Larry is a big fan of Baruka. Who (or what) is Baruka? Stay tuned…

This is probably going to exist as some kind of limited edition print. Still trying to figure that bit out 😉  I call it “Crazy Larry, Enhance.” It makes me giggle.

And here’s a mockup for a few 1″ buttons, with more to come. I can’t wait to have Larry’s mug pinned on my jacket. This also makes me giggle.

This is Crazy Larry. Is he about to deliver an atomic bear hug? Maybe he’s about to tell you a big fish story. Or could he be showing you what a pretty, pretty bird he is? You decide.

Justice has a history with Crazy Larry, kind of a love/hate thing. Like, he loves to hate Larry. BUT…Larry runs a pretty sweet Occult Emporium (& GIFTS!), and he is occasionally useful, so Justice tolerates him when he has to.

Seriously though, who couldn’t love a face like that?

I think I need to turn this into a bumper sticker. It calls to me 🙂

It’s like I stole his lunch money or something. Or maybe it’s because I haven’t visited the ol’ drawing board in a week or two :-O  Either way, this is the first thing that I came up with this morning —

I think my brain is trying to tell me something. Something something work more something.

Justice’s stare even scared me into doing a color version —

Yeesh. I get it, man. Stop staring already! I’m getting back to work!

Work in progress time! This is from Twisted Tales of Two-Fisted Justice, Issue 2, Page 8.

I based Larry’s shop on the now-defunct House of Adam men’s fashion store in downtown Cincinnati. I need to fill the windows with all of Larry’s unique knick-knacks, not to mention adding Justice’s ugly mug somewhere in the shot. I think this location will pop up quite a bit in future TToTFJ, so I’m trying to make it memorable. Brent created a pretty great character in Larry and I’m just trying to do him justice…pun intended! hey-O!

I’ll post the finished shot when I have all of the floating eyeballs, Cosmic Werewolves and cuddly teddy bears added to the scene. For now…back to work! I pencilled two pages today, which is an amazing achievement that needs to be commemorated with some sort of engraved plaque 😉 Progress, ho!

Did you know that Brent Daniels, writer extraordinaire for Elemental P Press, is also a budding artist? Well, you do now, because >BOOM<

SPOILER ALERT this character is one of the main villains in our first issue of Twisted Tales of Two-Fisted Justice, and the painting is Untitled because we didn’t give him a name yet. Anyone want to chime in with a clever moniker for our one-eyed friend? FYI, the name “Bob Robertson” has already been used, but I’m pretty sure “Dick Richards” is a viable option 😉

I’ll let you ponder on it for a bit.

Want to see more paintings by Brent? Tell him THIS IS AWESOME and GET BACK TO PAINTING, YO!

I don’t know if this piece is finally finished, or if it even will be the cover to Issue 2, but I do know that I’M DONE WITH IT. That’s not to say I’m unhappy with it, but what started as a sketch at SPACE has now taken up weeks of my life :-O  Time to set it free and move on to something else. 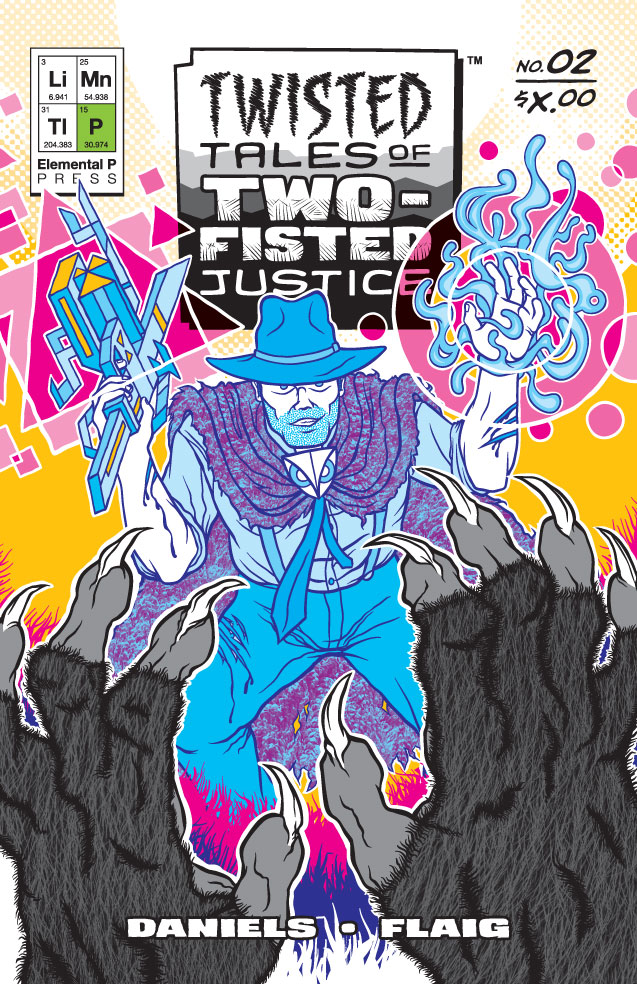 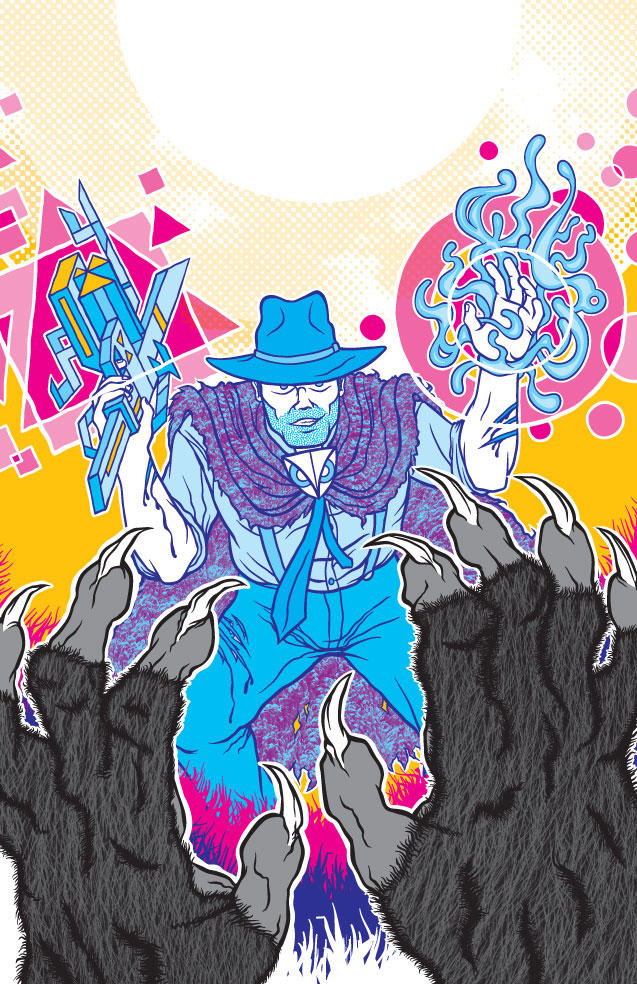 Tomorrow is Free Comic Book Day! If you have the time, swing by and join the celebration at your local comic shop, but also consider supporting them with a purchase for yourself or that special someone. Because giving away free comics doesn’t keep the lights on 😉

The first five pages of the second issue of Twisted Tales of Two-Fisted Justice have been uploaded to our gallery! Now you can binge-read the preview here. GO DO IT! We’ll wait…

Here’s the important info, only BIGGER:

As always, thanks for reading!